Fear of a black planet, rather than ‘economic anxiety’, gnaws at the West’s hallowed liberal democratic principles, writes Lebohang Mojapelo. 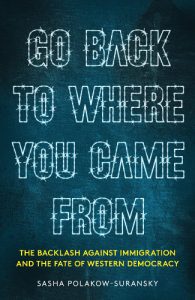 Go Back to Where You Came From: The Backlash Against Immigration and the Fate of Western Democracy
Sasha Polakow-Suransky
Hurst Publishers, 2017

From the United States of America to Australia, Western liberal democracies are hitting the self-destruct button. That is the theory, anyway, advanced by Sasha Polakow-Suransky in his latest book, Go Back To Where You Came From. The former New York Times international opinions editor and son of exiled South African anti-apartheid activists says that the anti-immigrant backlash sweeping across these states is eroding one of the two fundamental pillars of Western democracy: the protection of minority rights.

Liberal philosopher John Stuart Mill’s warnings about the tyranny of the majority have been cast aside, Polakow-Suransky suggests, as these countries pass laws and enforce policies that deny immigrants and refugees, especially those who are Muslim, basic rights and protections in domestic and international law. Through the course of a series of discussions with political leaders, academics and ordinary citizens, largely across western Europe, he argues that this outcome is the result of the far right cleaning up their racist, sexist and homophobic image to re-present themselves as the guardians of their countries’ most sacred values. This move, highlighted in the book by France’s Marine Le Pen, has flummoxed the left and forced it to scramble to the right as it seeks to recover lost ground.

Far-right politicians such as Le Pen ‘have deftly co-opted the causes, policies and rhetoric of their [political] opponents, seeking to outflank the left by blending a nativist economic policy—more welfare, but only for us—and tough anti-immigration and border security measures,’ Polakow-Suransky writes. Add to that a form of secularism that renders Christianity a culture not a religion, leaving Islam and ‘creeping Sharia’ as the main perceived threats to a secular state, and you have a potent political platform that is imploding Europe, he suggests.

But Polakow-Suransky’s claim that the far right has cleaned up its racist, sexist and homophobic act is dubious at best, and a dangerously apathetic reading of the current political moment at worst. The targets of the right’s anti-immigrant vitriol, in Europe at least, are largely black and brown—and usually Muslim—immigrants and refugees from Africa, Asia and the Middle East. French police forcing Muslim women to take off their burkinis at beaches and the attacks documented in Britain against Muslim women are explicitly racist—read Islamophobic—and sexist. And those on the right who speak out against immigrants and refugees don’t cavil in the slightest about attacking, not their legal status as said immigrants or refugees, but their identity, religion, customs, culture and values. It’s the politics of racial pollution, in plain and unabashed sight.

When police begin regulating women’s dress in Western democracies, clearly something more is at play than mere ‘economic anxiety’ about immigrants taking jobs, or living too lavishly on the welfare state. Phrases such as ‘French values’ and ‘Dutch values’ and words like ‘secularism’ are code for whiteness and its values, identities and ways. Polakow-Suransky alludes to this in a chapter on the rise (when did it ever fall?) of what he calls ‘white identity politics’, but never actually grasps the nettle. He does not acknowledge that the fear that black and brown people represent an existential threat to Europeans and their clearly superior ‘Western civilisation’ is an animating force behind the West’s new embrace of the far right, and in fact isn’t new at all. It is a propaganda myth Europeans have wielded for centuries, both on the continent and, especially, in the colonies.

The closest Polakow-Suransky comes to weaving this explicitly into his broader theme is by way of an interview with Willem Schinkel, a Dutch sociologist. Schinkel tells Polakow-Suransky in a chapter on what happens when integration fails that Holland has never had any real intention of admitting foreigners as equal citizens. According to Schinkel, as paraphrased by Polakow-Suransky:

… integration in Holland is about policing the borders of Dutchness to avoid welcoming outsiders into Dutch society. Integration places a huge burden on the individual to assimilate and become part of society while asking little of the larger society. When integration of immigrants fails, however, the responsibility is placed on the religious or ethnic community they come from.

It’s practices like this that give rise to the sentiments expressed via the Twitter hashtag #MuslimApologies, where Muslims, tongue-in-cheek, voice their frustration at being held collectively responsible for the actions of extremists who nominally share their religion. The standard by which a group is held accountable for the actions of individuals, of course, applies not only to Muslims but also to women, black people and members of the LGBTQI+ community. And if your identity spans all these categories, you spend your life apologising for your existence.

Reading Polakow-Suransky’s book from the perspective of the Global South, it’s impossible to swallow his framing of the problem as relating to the West’s fall from grace—the West in this case having once been a beacon of human rights that welcomed black and brown people, now falling short of this supposed enlightened past. The truth is, having constructed itself as inherently superior, European and American politics and identity are by design nativist and exclusionary. Their main purpose has been to preserve whiteness—economically, culturally, genetically.

The fear of a planet run by black and brown people was present in colonial conquests and the attendant obsession of the colonisers with limiting the reproduction of the natives. In Africa, this culminated in Project Coast, the apartheid regime’s covert biological weapons programme, one of whose mooted aims was to find a way to secretly make black men sterile. It was also inherent in the various experimentation with contraceptive forms on African women throughout the colonial period and continues today, most recently with the forced sterilisation of Ethiopian women in Israel, a practice that was uncovered in 2013.

The argument put forward by Thilo Sarrazin in his book Deutschland schafft sich ab (‘Germany Does Itself In’), which Polakow-Suransky cites, affords another example—and one that does Polakow-Suransky very little credit indeed. The German politician argues, essentially, that black and brown immigrant women in Germany are less educated and are having more babies than white Germans, and he equates education to intelligence, which he says is hereditary. By allowing the situation to continue, Sarrazin says, Germany as we know it will disappear, as less-intelligent black and brown citizens become the demographic majority. Frustratingly, in a scientific-racism variation of journalism’s false balance problem with regards to climate change, Polakow-Suransky not only euphemises Sarrazin’s argument as ‘borderline eugenicist’, he goes on to mull it over seriously rather than dismiss it off-hand as racist and discredited.

Any demonstration of an understanding of how whiteness works as an inherently nativist and exclusionary culture is also absent in Polakow-Suransky’s chapter on xenophobia in South Africa. The subject of the chapter is a woman, Mary Louw, who isn’t white but whose reasoning is similar to that of the West’s far right. ‘They’, she argues, meaning immigrants from other African states, are taking ‘our’ jobs and our benefits. They are criminals and we are no longer safe because of them: ‘We are slaves of this democracy, not recipients … sweating day and night for the future of our own children, yet the foreign rapists of our freedom and economy seems to be the only beneficiaries,’ she says, according to Polakow-Suransky, in a WhatsApp group she runs that spreads xenophobic propaganda.

What Polakow-Suransky fails to recognise is that many black South Africans, internalising the ideology of their conquerors, have largely adopted the notion that they are exceptional in relation to the continent’s other indigenous people. Perhaps this prejudice existed in pre-colonisation contexts, but it has certainly become more apparent since the fall of apartheid, the trumpeting of the country as a ‘miracle’ and the adoption of a Western liberal constitution that proponents of liberal democracy fawn over.

‘We can’t think like Africans in Africa, generally. We are in Johannesburg. This is Johannesburg. It is not some national road in Malawi,’ President Jacob Zuma said, to laughs and applause, in a speech in 2013 urging motorists to register for the automated tolling system meant to recoup the costs of upgrading the highways in Gauteng, the country’s richest province. Zuma later apologised to the Malawian government for these comments, but it was too late. He’d revealed a mentality all too prevalent in the country.

Many South Africans do not see themselves as part of ‘black Africa’, and this is the basis of their denial of the humanity of other Africans, whom they can malign, rob and burn with impunity. While the chapter on South Africa is titled ‘Xenophobia Beyond Black and White’, the matter is not, in fact, beyond race. Economic anxiety alone does not explain Louw’s thinking—nor does it that of Johannesburg mayor Herman Mashaba, a notably anti-immigrant politician from the ranks of the DA, a political party rival of Zuma’s ANC, who gets a passing mention in the book for espousing similar sentiments to Zuma’s, earning him, in activist circles, the moniker ‘South Africa’s Donald Trump’. As one immigrant-rights activist after another told Polakow-Suransky, this mentality comes from the top down. But he seems not to have taken their analysis seriously.

This is not to say, of course, that economics plays no part in the rise of the illiberal right. But white immigrant workers and the descendants of white settlers in South Africa are spared Louw’s rants, as is the disproportionately white ten per cent of the population that owns up to ninety-five per cent of the wealth. If anything threatens Louw economically it is this horrifically skewed and racialised distribution of wealth, but those who benefit from it are not in her sights.

Ultimately, Go Back To Where You Came From is a necessary book that highlights how those ‘contending that Muslim immigrants threaten the West’s cultural fabric’ have neglected to ask ‘whether the threat to liberal democracy could originate from within, rather than from outside’. However, it does not go far enough in its pursuit of the true nature of the threat from within. What is gnawing away at the hallowed liberal democratic principles in Western and Westernised societies isn’t only or even largely economic or purely cultural: it is the set of ideologies that underpin white supremacy. To be mealy-mouthed when saying this is to be complicit in the ostracisation, oppression and bodily harm that befalls black and brown people daily in these societies.