Hugh Ramapolo Masekela, one of South Africa’s most celebrated and pioneering musicians, has died in Johannesburg.

Masekela had been fighting prostate cancer since 2008. He was seventy-eight. 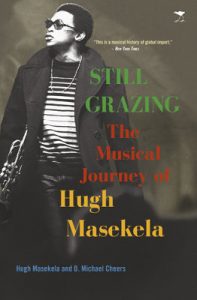 Bra Hugh was born in KwaGuqa township in Witbank on 4 April 1939, and played the piano from a young age. In 1954, when he was fourteen, Masekela took up the trumpet, and three years later he received one as a gift from respected priest and leader in the anti-apartheid movement Father Trevor Huddleston, who had received the instrument from Louis Armstrong while in exile.

Masekela played in South Africa’s first youth orchestra, the Huddleston Jazz Band, and in 1959 was part of Todd Matshikiza’s massively successful musical, King Kong. Soon after that, he became a member of the now legendary group The Jazz Epistles, along with Kippie Moeketsi, Abdullah Ibrahim and Jonas Gwangwa.

In 1960, at the age of twenty-one, Masekela left South Africa, following the political unrest surrounding the Sharpeville Massacre, beginning what would become thirty years of exile. 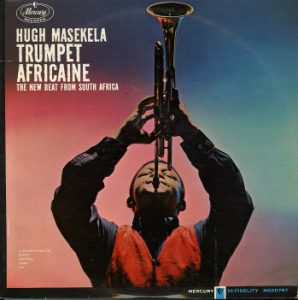 He studied at London’s Guildhall School of Music and Drama, before moving to the United States to attend the Manhattan School of Music, during the golden era of the New York jazz scene. Masekela immersed himself in the movement, watching greats such as Miles Davis, John Coltrane, Thelonious Monk, Charles Mingus and Max Roach on a nightly basis. Legendary musicians such as Dizzy Gillespie and Louis Armstrong encouraged Masekela to develop his unique style, based on African rather than American influences, and his debut album Trumpet Africaine was released in 1963.

Masekela married Miriam Makeba in 1964, but the couple divorced in 1966.

Masekela moved to Los Angeles in the late nineteen-sixties, and in 1967 Hugh performed at the Monterey Pop Festival alongside Janis Joplin, Otis Redding, Ravi Shankar, The Who and Jimi Hendrix. In 1968, his single ‘Grazin’ in the Grass’ (video below) became a worldwide hit, and won him a Grammy for ‘Best Contemporary Pop Performance—Instrumental’. 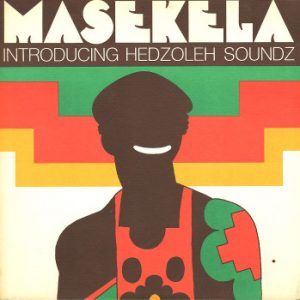 In 1970, during a tour of Guinea with Makeba, Masekela met Nigerian Afrobeat musician Fela Kuti, who introduced him to the Ghanaian band Hedzoleh Soundz. The resulting collaboration, Introducing Hedzoleh Soundz, released in 1973, became one of the most highly regarded Afro-jazz albums of the decade. The next year, in 1974, Masekela released I Am Not Afraid, featuring the song ‘Stimela’, which became synonymous with his performances for decades to come.

Masekela returned to South Africa in the early 1990s. In 2004 he released an autobiography, Still Grazing: The Musical Journey of Hugh Masekela (co-authored with D Michael Cheers), which was rereleased in an updated version for the first time in South Africa by Jacana Media in 2015.

In 2010, President Jacob Zuma honoured Masekela with the highest order in South Africa: The Order of Ikhamanga.

In 2016 Masekela and Abdullah Ibrahim performed together for the first time in sixty years, reuniting the Jazz Epistles to commemorate the fortieth anniversary of the 1976 Soweto Student Uprising.

Masekela is survived by his wife, Elinam Cofie, whom he married in 1999, his daughter, Pula Twala, and his son, Selema ‘Sal’ Masekela.

It is with profound sorrow that the family of Ramapolo Hugh Masekela announce his passing. After a protracted and courageous battle with prostate cancer, he passed peacefully in Johannesburg, South Africa, surrounded by his family.

A loving father, brother, grandfather and friend, our hearts beat with profound loss. Hugh’s global and activist contribution to and participation in the areas of music, theatre, and the arts in general is contained in the minds and memory of millions across six continents and we are blessed and grateful to be part of a life and ever-expanding legacy of love, sharing and vanguard creativity that spans the time and space of six decades. Rest in power beloved, you are forever in our hearts.

We will, in due course, release details of memorial and burial services. Hugh Masekela was someone who always engaged robustly with the press on musical and social political issues. We laud the press for respecting his privacy through his convalescence, and during this, our time of grief. Our gratitude to all and sundry for your condolences and support.