I burnt photos, letters, poems.
But your image remained,
as if you never grew.

I don’t know where you are,
lost flash of insight, nightmare
of poets.

No distance, no circumstance will replace
you. We meet, oh we meet in the now
through thoughts and dreams.

Love is a crocodile, dear one,
fasting, fasting.

He gave me a kiss, at Balfour station
a bye-bye kiss. The train took him
away to June 16, away for June 16.

When we returned to Seme Secondary,
no coaches had any trace of Kofifi Macu.

‘Your desk is cold Kofifi,’ screamed
my telegram: ‘I am a candle without
a wick, cold as a whistle, as a whistle.’
A registered envelope followed:
‘Seme cries for you, Kofifi Macu.’

Through The World and the Weekend World,
Seme combed, examined images, read
between the lines, and furrowed its face
to dialects, jargon, sounds of words.

In December I cried as a baby,
as a baby on Kofifi’s mother’s breast.
‘He’ll come, my girl, he’ll come back.’
Her plump palms echoed my whimpers.
‘All over Soweto and Alex, bloodhounds
and informers hunted and haunted them.
Now no Boer can dare, my girl,
not in Mzee Nyerere’s schools.’

The following day I left for Balfour.
What an enigma boys are.
Even Kofifi’s friends had an interest
in me, and a few unhinged teachers.

I immersed myself in my studies.
Got position two in Form Two,
passed Junior Certificate in first class,
passed matric with distinction,
got a bursary for nursing
to match Kofifi’s exile education.

Come 1990, come kiss of the decades …
Like ancient gods, exiles landed,
unexpectedly. They kissed the soil,
waved at the southern sun,
sang the anthem of the south.

‘Kofifi’s a guerrilla, isn’t he?’ assured
his mother, dreamily, ‘He’ll come back
underground-style!’

We pestered some individuals …
We haunted the movements …
One officer gave us hope:
‘In exile they received new names.
Wait for us, mother,
wait for us, sister.
Once we settle down,
we will let you know.’

At the private hospital I tried to love
someone—a specialist, but oh, God,
the affair ended like a bad dream.
No one could fill Kofifi’s space!

On the election day, a white
envelope in the morning;
our surprise at the gate.

‘Dear Mrs Macu,
I hate to confide this to you:
They purged him, with scores
of others in exile.

No one among us
knows their graves.

Shhh … those who gave the orders
have hidden this from God.
They will cut off my tongue,
my nose, my ears, my limbs. 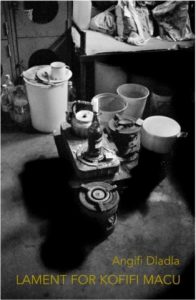