Exclusive to The JRB, an excerpt from the debut novel of Zimbabwean author SL Masunda. 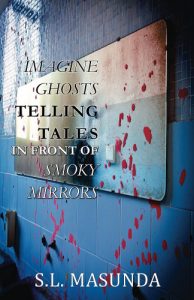 It won’t make a difference if you’re right or wrong, you just have to make a decision. More’s the pity it is in our flaws, not merits, that we find meaning in humanity. We vary broadly enough in morality. It’s in our absurdities that we are akin. I don’t believe any man ever was without sin. Sin is one of those touches of nature that makes the whole world kin. If there was, he would be an extremely uncomfortable person to associate with. To be forthright, he would be the most boring person to have ever been born.

These reflections make me feel a little more cheerful about my travels, but only for a brief period. On the other hand, for the record, it is not trouble that makes me miserable. For the next moment I contemplate what a fool I must be that I should leave my fate in someone else’s hands, hoping it would all work out for good. Half an hour’s indulgence in these considerations works me up into a state of savage rage against everybody and everything, especially myself.

I have always thought of myself as the sea. Possessing the twin virtues of simplicity and mystery. But at present I feel like the thief hanging on the cross—the one who was damned not the one who was saved. Alas, our happiness at present always is derived from our hope of a future state. As a result, the hope of attaining perfection becomes our main source of misery. We put ourselves in God’s shoes and judge our engagements, which inevitably always renders us miserable. And at once sin becomes an insoluble vice, just sufficient to give us a flavour of suffering and make our lives poetical. Understanding depends on perception, I guess. We can only relate with regard to our own experiences. Nothing in itself is flawed, but everything is suited to its environment. Ordinary men avoid chaos but great men turn it to their advantage.

Slipping back to consciousness I scout the vicinity. An elderly man, topless, makes the rounds. The elderly man carries his dreadlocks with his right hand, as if it were a baby, and a pipe with the other hand. On occasion, after every other round, the elderly man stops to take a pull and then fans the smoke away with his bundle of hair. It reminds me of benediction in high school, particularly this song we sung deep-toned. But I never got to learn the words, only hummed deep notes.

There were four engulfing fires blazing at each of the main cardinal points. The fire wasn’t to chase away the cold, no. A predator much more dreadful. Here and there, the elderly man would blow on his horn hanging from his left shoulder and the beasts would kindly echo a roar. Much for the group to acknowledge the beasts’ presence; six strangers were restlessly camped in the heart of the inferno.

Once, when the elderly man was close to the eastern fire, from the west she approached, sending us all on a dash for our lives. It was to tease us, it appeared. For I reasoned, if the lioness wanted she would have easily pounced on the old frail woman. But then again there was something about the old frail woman that was repulsive. It must have been the look of hunger, which screamed weakness, a lack of resilience for failure. The elderly man ran in the direction of the lioness blowing his horn rampantly. It wasn’t the noise, but rather the awkwardness of his gestures that alarmed the predator. Arms and legs spread out like a starfish as he advanced. No one had the nerve to sleep after that little scuffle. Each bloke had his eyes fixed on the black of the night. Any sudden variation in the darkness set them all on their feet. Some glared dolefully towards the heavens, somewhat a last call to the Creator.