American author George Saunders has won the 2017 Man Booker Prize for Fiction for his novel Lincoln in the Bardo. 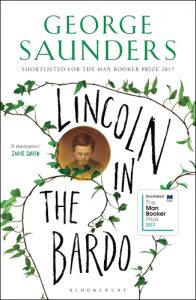 Saunders becomes the second American author to win the prize, after last year’s winner Paul Beatty. The award was previously restricted to citizens of the Commonwealth (including Zimbabwe) and the Republic of Ireland, but in 2014 was controversially opened up to writers of any nationality, writing in English and published in the UK.

The fifty-eight-year-old Saunders is the author of six collections of short stories, but Lincoln in the Bardo is his first full length novel.

Chair of judges Lola, Baroness Young said: ‘The form and style of this utterly original novel, reveals a witty, intelligent, and deeply moving narrative. This tale of the haunting and haunted souls in the afterlife of Abraham Lincoln’s young son paradoxically creates a vivid and lively evocation of the characters that populate this other world. Lincoln in the Bardo is both rooted in, and plays with history, and explores the meaning and experience of empathy.’

Saunders was presented with a trophy from HRH The Duchess of Cornwall and a £50,000 cheque by Luke Ellis, Chief Executive of Man Group at a black-tie dinner at the Guildhall in London. He also receives a designer bound edition of his book and a further £2,500 for being shortlisted.

Watch a video of Young explaining the process behind choosing this year’s winner:

The 2017 Man Booker Prize shortlist was: