Moonlight and love songs
Never out of date.
Hearts full of passion,
Jealousy and hate

—‘As Time Goes By’, Herman Hupfeld

I used to take a lot of photos. An obnoxious amount, until I read an article that said the way memory works is we remember the photos we take in place of the experience we had. It’s 2017, and studies get debunked as quickly as their conclusions are released. But I still take that article quite seriously, for some reason. 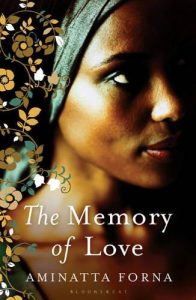 It is this plasticity of memory that Aminatta Forna explores in the The Memory of Love. A man, Elias Cole, is dying and his last concern is with personal mythmaking. He has little to show for himself—a large but empty home, and no family, it seems, apart from his devoted servant, Babagaleh. But he believes that if he can tell his life’s story this can all be corrected, and the love that consumed him as a young lecturer can remain undiminished. Through his story we luxuriate in the lush Sierra Leone of the nineteen-sixties, before things went badly wrong. It was a more peaceful time, when the greatest excitement was everyone getting ready to watch the moon landing.

Elias’s story intersects with that of Adrian, an Englishman on an undefined mission in Freetown—the stock white foreigner trying with little success to wrest Africa into something that enables him to discover one or other deep truth about himself:

It was errantry that brought them here, flooding in through the gaping wound left by the war, lascivious in their eagerness … They came to get newspaper stories, to save black babies, to spread the word, to make money, to fuck black bodies. They all had their own reasons. Modern-day knights, each after his or her trophy, their very own Holy Grail.

As a psychologist, Adrian is desperate to understand Sierra Leone, but he never quite fits in. The head of his psychiatric hospital laughs away his concerns, telling him that foreign consultants determined ninety-nine per cent of the population were suffering from post-traumatic stress disorder. Like Elias, he is possessed by memory, beating ever backwards. His interest lies in what the Civil War, which tore Sierra Leone apart from 1991 to 2002, did to the collective consciousness of the country; what went on while he and the rest of the world looked away.

‘It was rage. It wasn’t a war, what happened here, in the end. It was fury. Having nothing left to lose.’

‘Do you know what it was like to survive in a place like this, where everyone was watched all the time, when you never had any idea who your friends were? Waiting to see who would be next … Oh of course, the new orthodoxy. Everyone’s a victim now. It’s official.

In particular, Adrian is intrigued by the mental contradictions within a traumatised patient called Agnes, which are symbolic of love’s own crooked course. She appears normal some days, but cyclically abandons her life in search of something or someone, kilometres away, that she never manages to find:

Fugue, they call it in his profession, a condition in which the body and the disturbed spirit are joined in shadowy wanderings.

Everyone says Agnes is just ‘crazy’, but Adrian is convinced he can help, and adds her to his concerns in Freetown, which include listening to Elias Cole’s life story and falling into an unexpected love of his own.

Sierra Leone is a place where things unfold on a grand scale. This year, the capital of Freetown was choked by devastating mudslides and floods. In 2012, the supermodel Naomi Campbell gave conflicting testimony about receiving blood diamonds from warlord-cum-president Charles Taylor, which linked her tenuously to the War (she purpotedly mistook one of the War’s main sources of funding for ‘dirty little stones‘). It is a place of the sensational. Thus The Memory of Love could have been written as a tableau of poverty-porn beaches and shanty towns, soaked in blood, beset by rape and chaos. The facts are there, the stage is set, and Forna is a research beast, as was evident in her first outing, The Devil That Danced on the Water: A Daughter’s Quest, in which she investigated the truth about her father, who was executed on trumped up charges of treason.

So it’s a testament to Forna’s writing, her swift bright prose, her narrative focus and level of restraint, that clarity rises to the fore. The violence isn’t omitted but appears in rightful measure. Just the ghosts, stumps where hands should be, empty cells, terror and brutality inscribed invisibly on the city, are enough to tell us what happened here. Her fully-realised, emotional fiction, with its focus on the small details, explains the overarching horror pellucidly.

Haunting The Memory of Love are several ghosts and silences. What remains unuttered, unconfessed, is as important—perhaps even more—than what is.

‘Have you never noticed? How nobody talks about anything? What happened here. The war. Before the war. It’s like a secret.’

Adrian, Elias and Kai Mansaray, a mysterious orthopaedic surgeon, all face the same questions. Is love more powerful if, like an arcane lamp burning, it is never revealed? And if it is let loose can its burn ever be cooled?

How does a man like him believe in love? A man trained to analyse the component parts of emotion … He who would name, classify and diagnose every nuance of the human soul into attachments, complexes, conditions and disorders.

Kai slips into Adrian’s life like a stray cat, barely leaving a mark until the final climax. He reveals little of himself, even to himself. He ignores his best friend’s correspondence from America, inviting him to relocate and seek out a better life. He is stitching and splinting back together the victims of the war at a breakneck pace, as if trying to suppress deadly memories of his own, perhaps a love lost:

In the second class were the peasants … Unarmed and poor, the waste of a bullet wasn’t so much resented as simply unnecessary. They were the victims of attacks using machetes and cutlasses. C. The doctor’s own shorthand adapted to the circumstances. C. Cleaved.

As a local, the person best qualified to tell us about the war, Kai rejects our expectations, the pressure we put on him, keeping us in a state of suspense as to his true story.

Forna has been quoted as saying, ‘Sometimes that difference is one of perspective. A cow can tell you what it is like to stand in a field and chew the cud; a cow cannot tell you what it looks like standing in a field chewing cud’. With this in mind Forna moves her main men, Kai, Elias and Adrian, around the story, through several decades, tinkering skillfully with different perspectives, and the effect is like sitting in the ophthalmologist’s chair, as the lenses are stacked, then swiveled, then switched out and taken away. Until at the end—gasp!—we are left with the perfect tragic vision of love and collective violence, and a complex palimpsest of Sierra Leone.