The JRB’s City Editor Niq Mhlongo takes some time out from sitting under his apricot tree in Soweto to visit Mapungubwe, a place far away from everything that brings him closer to tradition and history.

The sky is marbled in blue and white when we arrive in Alldays town in Limpopo at about three in the afternoon. We are advised by our host, Mr Ngwenya of the Kaoxa Bush Camp, to stop here and fill our car’s tank before our final destination. The Mapungubwe National Park has no shops nearby.

The sun is burning in the heavens, and the Astra’s boot is full of two days’ groceries, including drinks. Ahead, a road sign reads ‘Mapungubwe 67km’. The ball of fire is reflected in a mirage on the boiling surface of the R572 tar road. On both sides of the road a huge fence protects a vast land of lush greenness and extremely rich pasturage. Most of the tree branches are broken, but there is no sign of activity in the bush. Next to the two majestic baobab trees in front of us, however, the wooden fence-poles have been pushed down, and there are fresh heaps of elephant dung.

Just as we pass a bridge over a small, flowing stream, there is a captivating spectacle: a herd of elephants are cooling off in the muddy water. It is the first time I’ve seen elephants play this close. We park the car on the side of road, lean against the bridge and watch them. The stream is covered with a dense growth of reeds on the inner side and on the bank, and they sway violently to and fro as the elephants play quietly with their trunks. 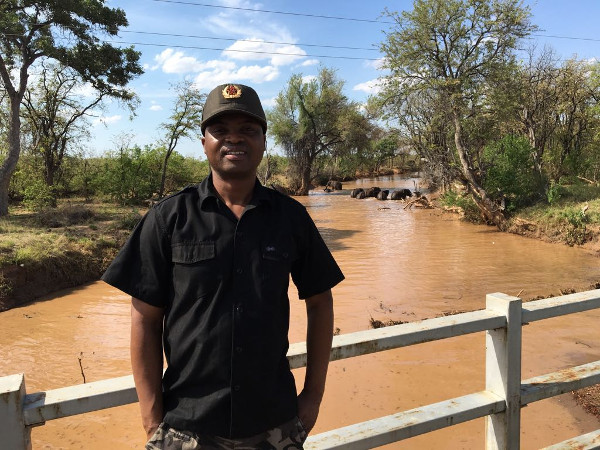 We leave the elephants reluctantly and continue to Kaoxa, less than ten kilometres before the Mapungubwe gate. As my friend Kays and I open the gate into Kaoxa, a duiker or two take fright and scamper down the hillside. A sign by the huge baobab reads ‘Kaoxa: Drifters Adventours’, and we see a guy in a blue work-coat approach us with a smile. 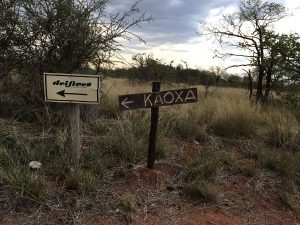 ‘Hi, I’m Ngwenya, your host here at Kaoxa. Welcome to our great palace!’ he says as he guides us towards the stone and thatch cottages behind the tall trees.

We park the car next to the swimming pool. There’s an extraordinary view of the koppies and the confluence of the Limpopo and Shashe Rivers. This is the boundary where Botswana, Zimbabwe and South Africa meet. Some giraffe and zebra are grazing in the valley below.

‘You just missed some elephants. They came to drink water from that waterhole some thirty minutes ago,’ Ngwenya says.

The fire is already prepared. Ngwenya and his cousin Jeff are doing the braai for us. They regale us with stories about how they cross the Limpopo River into Zimbabwe almost every fortnight to see their families. Our party is finally interrupted by a sudden downpour, at about eleven.

The morning sky is cloudy and we prepare for the Mapungubwe safari, which starts at half past six. About R400 covers our guided walk, drive, and a visit to the cultural attractions. Inside the safari truck is a couple from Bloemfontein whose interest is birdlife. Our guides, Kgomotso Masalesa and Ndlovu, sit in the front carrying rifles as we navigate the Limpopo valley of Mapungubwe. The car stops, and Masalesa points at a lonely koppie on the right.

‘That’s Serutu, the place where rainmakers performed their rituals in the past, praying for rain from ancestors during drought,’ he says.

Having lived and gone to school in Limpopo in the nineteen-eighties, this reminds me of Modjadji, the Rain Queen of the Balobedu nation, near Tzaneen, and the annual rainmaking ceremony held at the queen’s compound in Khethlakone Village every November. Being in Mapungubwe is for me like being in conversation with that mystical past in the present, like taking a step back a hundred years in time to rediscover unspoiled parts of Africa. 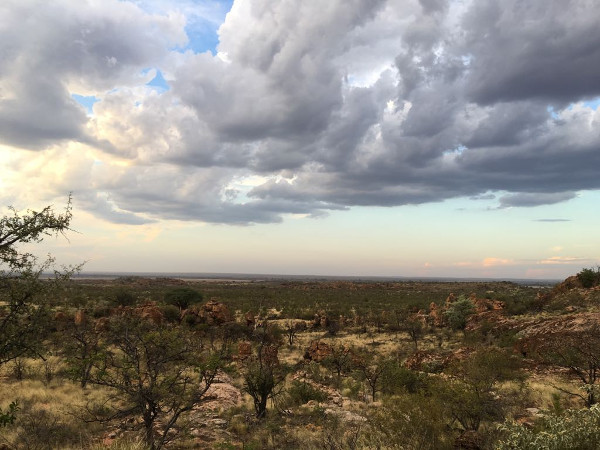 We stop near a stream, and Masalesa asks us to leave the car. The earth is soft and damp from yesterday’s rain. Small piles of soft earth are pushed up in the footpath, and I can only assume it is the work of an earthworm. Masalesa and Ndlovu squat to examine a small print and a hole on the ground.

‘This belongs to one of the big five of the small animal kingdom,’ Ndlovu says.

This is the first time I’m hearing about the big five of the small animal kingdom, the ‘Little Five’. Echoing its larger cousins, it consists of the antlion, the elephant shrew, the leopard tortoise, the rhinoceros beetle and the buffalo weaver.

Suddenly, Masalesa jerks his head up as if he has heard something. His hands wave in sign language while his eyes command us to stay put. Coming towards us slowly is a python, and it’s less than six metres away. The snake sends an electric jolt of fear down my back and legs. Masalesa signals for us to move away very slowly without frightening the snake.

‘You guys are blessed,’ he says. ‘Are any of you from a royal family? I’ve never seen such a royal welcome to Mapungubwe since I started working here.’

The sight of the snake somehow makes me feel the presence of my ancestors. In most African traditions a person who sees a snake is considered to have seen something important. It foretells either good or bad fortune coming from ancestral gods.

‘We have natural water springs around here,’ Masalesa explains. ‘Some pools are believed to have big black pythons in them that stop the water from drying up.’ 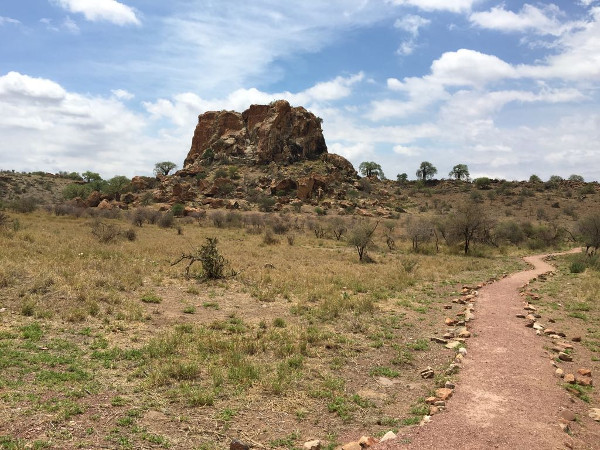 We walk through the mopane trees, alongside the giant koppie, and admire the beautiful, dramatic rock formations. Every now and then we stop and listen to the birds. The couple from Bloemfontein can identify many of the birds by listening to their chirps.

‘We have seen 227 bird species in two days,’ says the woman excitedly, as she writes on her notebook. ‘Oh, is that a ground hornbill?’

‘There are over three hundred bird species in this area,’ Masalesa says, without looking at the woman. ‘But a ground hornbill is a no for me. Just like crows, owls and eagles they’re not good to dream about. They’re used by the witches, and they bring bad luck if you come across one.’

‘We’re not leaving until we see the species,’ says the man, who is walking behind his partner.

We reach a huge cave by the mountain, and Ndlovu guides us to the San rock art where we rest for an hour. He also gives us water and snacks. 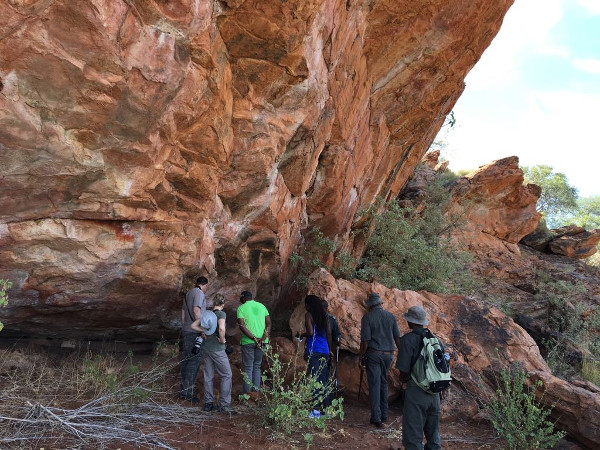 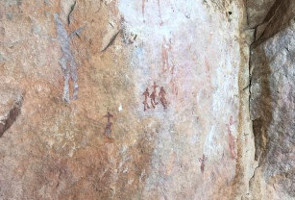 ‘The Basarwa people who drew this art were the first people to settle in Mapungubwe,’ he says. ‘The eland was a special animal to them and they used part of it and its blood as medicine.’

There are some huge baobab trees in front of us containing a number of buffalo weaver nests. After taking a sip of his water Masalesa says: ‘Buffalo weavers always make their nests on the western side of a baobab tree, and this helped hunters and cattle herders find the right direction if they got lost in the bush.’ 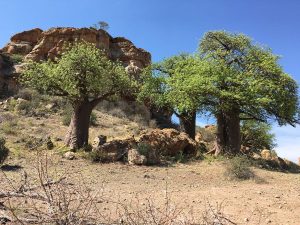 The mid-morning sky is cloudy as we climb to the top of Mapungubwe Hill. This is a mythical spot with breathtaking landscape. At the top of the hill, Masalesa explains the cultural and historical importance of Mapungubwe, which dates back to the Iron Age. We learn about trade that existed there with Egypt, India and China through the Islamic traders on the coast, and he takes us through the ancient grave sites on top of the hill. The scenery is magnificent and serene. For the first time, Masalesa discloses to us his umbilical connection to Mapungubwe, and explains how archeologists uncovered the famous golden rhino figurine from the site in the 1930s.

‘This hill was respected so much at the time,’ he says. ‘You could not climb it or even point at it. If you did, there would be serious punishment by the ancestors. Some people went deaf, blind or mad. Chewane Mokwena, the person who showed ESJ van Graan the hill of the ancestors in the nineteen-thirties, was punished by becoming blind for the rest of his life. I’m Chewane’s direct descendant.’

As we descend the hill, I feel I have lived through the secrets of our culture and tradition. On this unforgettable day I have rediscovered the history and tradition of the African people who lived in what was then the largest state of the African subcontinent.

We stop under a leafy tree. Masalesa picks a leaf and inhales for a few seconds, and it appears as if it has an immediate medicinal effect upon his system. ‘We call this monepenepe tree,’ he says. ‘When boiled, the roots are used to heal fever and clean the bladder and kidneys, and it also cleans blood.’

By the stream, Ndlovu squats and examines the paw marks of a four-footed beast. He identifies it as a lion and swears it’s watching us, wherever it is. 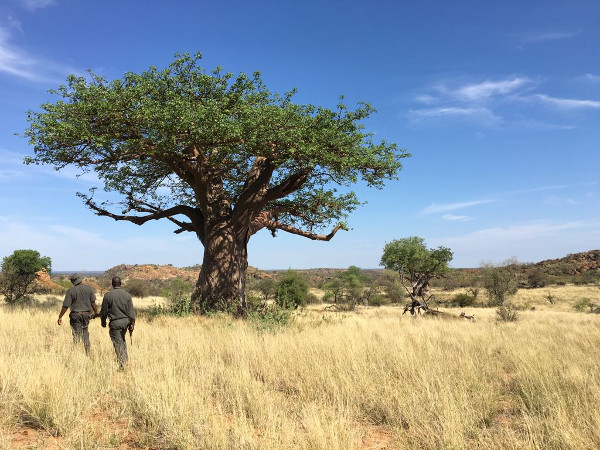 One thought on “[City Editor] The place of the ancestors: Niq Mhlongo leaves the city to walk the hills of Mapungubwe”