In her debut collection of essays, One Day We’ll All Be Dead and None of This Will Matter, Scaachi Koul delivers expansive and flowing writing, and lemon-sharp humour.

Koul will be appearing at the Open Book Festival in Cape Town this week.

One Day We’ll All Be Dead and None of This Will Matter
Scaachi Koul
Picador, 2017

The blaze of popularity enjoyed by the essay form is in no small part due to the fact that it allows many authors—mainly men—the space to explain, to expound and to extol. We have seen a great many instances of the Man Essay, in which writers explain things both great and small (‘The Joy of Cornflakes’, ‘Why Donald Trump is Not The Worst Thing That will Happen To Us’, etc.) in a whirl of finely wrought sentences and stylish turns of phrase.

Behind much of the latter-day rejoicing in the essay form is the banalisation of knowledge, where the exhibition of knowing is two parts personal story and a healthy sprinkling of epiphany, which is simply the act of giving meaning to all the details you’ve stacked up. The good essay is indeed a thing of joy to behold, but too many recent collected essays are simply a bouquet of off-cuts and discarded mutterings in which the author is at pains to demonstrate their finely grained—yet casual—powers of noticing. What is being said doesn’t really matter, as long as you can say it over three or four thousand longform words. 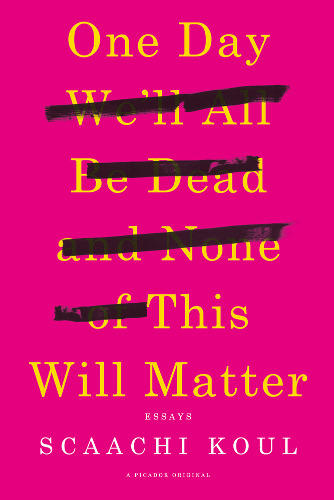 Not so with Scaachi Koul’s collection One Day We’ll All Be Dead and None of This Will Matter. This is a tightly arranged set of ten astonishingly incisive pieces, which cluster around ideas of identity, belonging and alienation. Written in the confessional voice, the essays texture the world of the author in a way that is vitally human in moments of anger, shame, vulnerability and laughter.

The culture Koul brings into relief will be familiar if you’ve seen the television series Master of None: the story of a second-generation immigrant millennial whose parents were part of the generation that sought a better life for themselves. Koul’s parents are Indian, and the family has immigrated to a Canada that is determined to exclude them. But Koul is not so much explaining this state of being to a Western audience as inhabiting it in order to comment on that way of looking that defines brown people as inscrutably other.

What gives the collection much of its lemon-sharp humour is Koul’s account of the constant imposition of said feeling of otherness. Remarking on how, when she was a child, white people had always asked where she was from, she dryly describes how her answer would prompt the typical banalities anyone deemed other encounters in such an exchange:

‘Oh, I hear India is amazing! Does your mom make curry?’ Then I would shrug and say, yeah, sure, I guess she does, but isn’t that like me asking if your mom boils water?

Koul writes in a conversational style that calls to mind Miranda July and marks her distinctively as belonging to Generation Cringe. Like Broad City or Mindy Kaling’s The Mindy Project, the writing engages some of the broad taboos many of us have regarding what women—or womyn—should say and/or do. So when she says ‘at our cores, we are all swirling masses of infectious disease, pulsating orbs of pus, moist tubes filled with piss and shit’, it’s a swig of bitter-beer vivid realism unfettered by propriety.

The collection buzzes with the language of the present. Everything is witty and socially sensitive and brimming with the intensity of detail befitting of a writer who earned her stripes at BuzzFeed. But the pieces don’t have the impatient scatterings of detail that marks online writing. Witness Koul’s patient unfolding of a traditional arranged marriage in the essay ‘Aus-piss-ee-ous’ (say it out loud), in which a trip to India becomes a dense layering of ideas around what it means to experience a culture that both claims and estranges. Koul treats her subject matter with a welcome degree of sensitivity, tethering her feminist subjectivity to a capacious understanding of the contradictions of life in India. This explication of her familial ties proves correct her assertion that ‘a place, any place, can be beautiful and perfect and damaged and dangerous at the same time.’

Of the glittering essays that make up this collection, ‘Mute’ and ‘Hunting Season’ are notable for how exceptionally well Koul traces the contours of toxic masculinity. The first essay deals with the infamous moment when Koul found herself subject to a wave of abuse after she, in her position as writer at BuzzFeed, suggested that the website’s call for new voices meant people who were not white and male. She unpicks the stages that shape our response to being attacked online, and what she reveals is not only the violence, but the entitlement that structures the trolling, threats and abuse. ‘The troubling part,’ she thinks, ‘is not that there are people online who feel comfortable—vindicated and strong—in calling me a cum-bucket. What scares me is that those people go out into the world … and exist around me physically. I see them at the bank and they go to my dentist and I might end up working with them.’

What is troubling in ‘Mute’ becomes sinister in ‘Hunting Season’, where Koul’s calm analysis has the effect of illuminating the unsettling ordinariness of date rape. It’s hideously accurate and it strikes close to the bone as it demonstrates with deft precision how the callous maleness of the world is so terribly hostile to women.

These are two of the more intensely personal essays in a collection that prefers to focus on connections with others, and cannot but overshadow some of the gentler writing. Further, the thematic bonds that tie the collection together have a harder time adhering to them, demonstrating the difficulty of balancing the stretchy texture of the essay form against the stylistic rigour that good writing demands.

The book dares you to condescend by mixing humour, lewdness and challenging material in creative ways. Some moments have the savour of sour candy—witness Koul describing her extensive shaving routine and the anxiety that feeds it—while others are slapstick in ways that belie the fact that they are completely and exquisitely thought-through, like the moment Koul finds herself in a clothing store unable to remove a skirt she has just tried on:

The possibility of getting stuck in a garment at a store where the employees have to cut you out of it is the beginning of the end of your life. It’s like the saddest version of a C-section, where the baby is just a half-naked lady with no dignity.

In One Day We’ll All Be Dead and None of This Will Matter, all the elements of Generation Cringe are laid before us, but the difference might be that Koul doesn’t seem overly concerned with mitigating our discomfort. That discomfort is subverted by the fact that what these observations are doing is claiming the terrain of experience, asserting their right to be taken seriously as things that happen just as much to those who have for so long been assigned to the margins.

To be sure, Koul is a writer utterly in control of her medium. The essays are expansive and flowing, elegies for ageing parents and the tragicomedy of being caught in the clasp of the postcolony. Her relationship with her father—complex, close, poignant and funny all in one—runs through much of the book and it is what ultimately gives it its animating energy. ‘So much of immigration is about loss’, she says of her father’s longing for an imaginary homeland, and that loss is both Koul’s inevitable inheritance and the instant of her self-realisation.

Is all familial love as fraught and kaleidoscoped with guilt and resentment as it appears here? Perhaps. But giving personal meaning to this in writing, as Koul does in One Day We’ll All Be Dead and None of This Will Matter, is to allow the reader to see the collection as resembling exactly this overlapped, uneasy state. It’s a heck of an achievement.