My host Olivier Moreillon’s words are ringing in my head as the train approaches Zurich main station. From my second-class compartment, I look to my left and right to see if I can recognise anything. Most of the buildings seem to have a Big Clock-type landmark. Maybe time is of the essence here, I tell myself as the train comes to a stop. Remember, the Swiss made a very expensive watch and called it Rolex. Maybe that’s why they can afford a clock on almost every fifth building. I look at the time on my cellphone. It’s nearly 4 pm. I have an hour to loiter around, but my bag is too heavy. Outside the sun looks very hot.

As I take the escalator down towards Burger King and Starbucks, I try hard to remember my previous Zurich visit. Not so long ago, in November 2015, I had a reading at the Hotel Rothaus here in Zurich. I also stayed in that hotel for three days. But the only thing I can recall now is that Hotel Rothaus is not far from Zurich’s famous Long Street. At this point I can’t even tell which side of the Limmat River or lake the hotel is on.

The Zurich station looks like a huge shopping mall in South African terms. I decide to buy coffee at Starbucks and use their free Wi-Fi. All I want is to tell Olivier that I’ve arrived. Bad luck; I’m unable to connect. I try the Burger King and the station Wi-Fi connections without any success. I decide to pull my bag to where I see toilet signs. Two friendly ladies inform me that it’s 60 Swiss Rappen or one euro to use the toilet. They first speak to me in French, which I don’t understand. I only have euros on me as I have just come from Germany.

‘Where is the Big Clock?’ I ask one of the ladies as soon as I come out of the toilet.

‘Oh, you mean the big watch at the church where the tourists visit?’

‘No, I mean inside the station.’

‘Oh, turn right over there, and you’ll take an escalator. It’s a floor up. You won’t miss it. It’s the meeting and waiting place for everyone.’

Zurich and Basel will always have a very special place in my short story writing career. It is at the University of Basel that I read some short stories from my then-manuscript Affluenza in public for the first time. That was in October 2015. ‘The Warning Sign’, ‘My Name is Peaches’ and ‘Four Blocks Away’ were well received by the audience, mainly students of literature at the university. As I stand by the Big Clock waiting for Olivier, I remember that moment vividly.

I had been invited to Basel by Olivier, a PhD student at the university then. He is the same person who has arranged my visit today. I met Olivier at the Time of the Writer in Durban in 2014, when he was on a research stay at UKZN for his PhD on recent South African literature. What made my Basel visit a memorable one was that in the audience as I read my then-unpublished short stories was my former professor, Sheila Meintjes. Professor Meintjes taught me political studies at Wits University from 1995-1996. She was at the University of Basel for a scholarly project. Another special thing about my reading is that it was in the lecture hall where I’m told Friedrich Nietzsche, the popular German philosopher, cultural critic, poet, and philologist, taught from 1869-1878. Professor Meintjes used to quote Nietzsche a lot during her political studies lectures at Wits. You can imagine how I felt standing at the podium in the same lecture hall where Nietzsche used to stand, reading and talking about my short stories in front of Professor Meintjes and others. 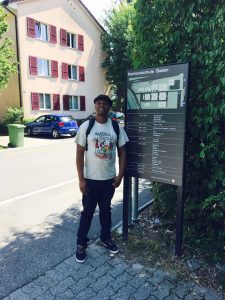 Today, this 4th of July 2017, I’m teaming up with Olivier again. This time I have been invited by Kantonsschule Baden, otherwise known as Kanti Baden, where Olivier teaches English. I’m the guest of Olivier and his English Department, and I’m here to facilitate a flash fiction/short story writing workshop for two days. I’m thrilled because Kanti Baden is where Albert Einstein went to school, or so I’m told.

‘I suggest tonight we have a braai and some beers. We can talk about the workshop,’ says Olivier as we leave the station and take a tram to his apartment in Zypressenstrasse.

Two weeks ago I sent Olivier, his colleague Mr Andreas Linggi and the students three short stories from my new manuscript to read in advance, and they sent through their students’ stories for the workshop.

‘There are about forty students from both my class and Andreas’s. Did you get all the forty short stories from the students?’

‘As we agreed, the theme of the short stories is ‘borders’. So every story that was sent to you should be on this theme.’

My mind is on the beer and braai that Olivier has suggested, but I try to think of the planned programme. On the morning of 6 July I’m reading one of my new short stories, titled ‘The Rope’, from my new manuscript, ‘Soweto, Under the Apricot Tree’. Then we will have a question and answer session. In the afternoon we are watching the film Invictus, and then we will talk about South Africa in general.

We get off at the station just after the railway bridge in Kreis 4, and stop at a supermarket to buy beer and meat. I tell Olivier that I want to drink a Swiss beer and he selects Vollmond Bier for me. From there it’s about a six minute walk to his apartment. Olivier makes the fire on a braai stand on the balcony of his third floor apartment. I try to connect to his Wi-Fi to make sure I’ve received all the short stories that the students have submitted. The night ends with us drinking, eating, and talking about South African literature.

In the morning we catch the train to Baden, which is about thirty minutes away. Andreas joins us at the school, and when we walk into the building there is a big display of Albert Einstein’s school report on the wall. In fact, the report takes up the whole wall. 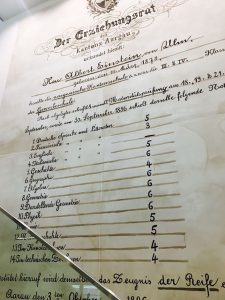 ‘So Einstein studied here?’ I ask as we walk up the stairs to the hall.

‘Well, he didn’t necessarily study here,’ Andreas says. ‘But his school was around this area of Baden. I don’t think this precise school existed during his time.’

We start with a coffee at the coffee shop inside the building. The head of the English Department comes and introduces himself. He promises to attend my reading, but it is a very busy week at the school as their long summer break begins that Friday. Two women arrive and introduce themselves as Celine and Phuong. They are from Le Petit Bookshop in Zurich, and have come to attend my reading. I feel honoured. They tell me that they have been trying to order my book, Way Back Home, in German, but it has not arrived yet.

My reading starts at nine. There are about forty students, the head of department, Olivier and Andreas, as well as Celine and Phuong. Immediately after the question session I have an interview with Veronika Meier from Swiss national public radio at eleven. The interview takes about forty-five minutes and we talk about South African politics and literature. At about twelve the interview is done, and Olivier, Andreas and I go for lunch at a restaurant across the road.

At one we watch Invictus and the students seem to enjoy it. This is evident during the questions, and many people would like to know about Mandela, living under apartheid and post-apartheid. After the film, we go to the nearest restaurant by the main road and have a few drinks. I settle for Ittinger Amber while Oli and Andreas drink wine.

That evening Zurich is buzzing as there is a Latin music festival near Long Street. Thousands of people are on the streets drinking, dancing and eating at makeshift kiosks. Latin music is playing loud, and there is a great smell of food, but I feel tired after a long day. I drink one beer, but then I need to sleep. 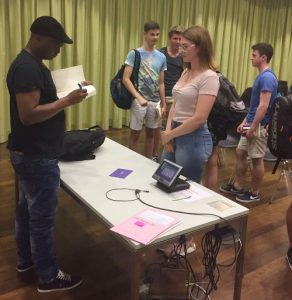 The workshop starts at nine the next morning, and Olivier and I take a train to school. In his bag are three copies of the English version of Way Back Home and one copy of Affluenza. These are the gifts to be given to the winner and the three runners-up. As soon as Andreas, Olivier and I enter the classroom, about forty students are there waiting for feedback on their stories. After the feedback I have a very long queue of students coming to discuss their stories face-to-face with me. This goes on until lunchtime, when students start submitting their reworked versions. The atmosphere is unbelievably beautiful, and all the short stories submitted are of high quality for students their age. After two in the afternoon I announce the seven shortlisted stories. Prizes are handed out for the stories in first to fourth place. The story that wins is by Fabian Wolf, and Tari Ann Herrmann gets the second prize. The prizes include an autographed copy of my book for each of the four students and some book vouchers.

My stay in Zurich ends on a high note on the Saturday. Olivier and I take Tram 6 to Zurichberg, Friedhof Fluntern. I have insisted on visiting the grave of one of my favourite writers, James Joyce. I adore his writing, especially Dubliners, his famous collection of short stories. 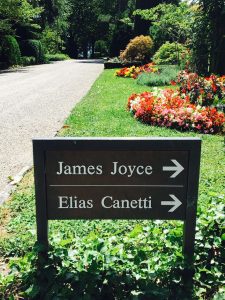 The cemetery is opposite the Fifa headquarters and next to the zoo. ‘I believe Joyce came here because he had a problem with his eyes. Then he decided he was going to live here after falling in love with the city,’ Olivier tells me as we follow the sign that reads ‘James Joyce and Elias Canetti’.

By Joyce’s graveside, I pay special homage by reading a paragraph from one of my unpublished stories, ‘Avalon’. After this I feel satisfied that I’ve met James Joyce’s spirit. He is my first audience for this story, and although I was only talking to his grave and statue I know he listened and enjoyed it.

So now I hope you can see why I consider Zurich my short story capital of Europe. As a special gesture, I’d like to end this adventure by sharing with you two of the wonderful short stories that were born as a result of the Kanti Baden workshop: 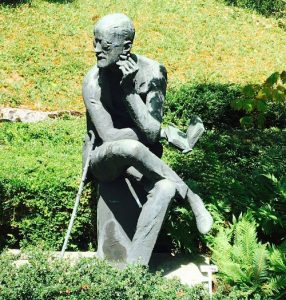