Chimamanda Ngozi Adichie has been named one of the nouvelle héroïnes of literature by the French newspaper and veritable institution, Le Figaro.

Madame Figaro, the women-focused magazine and offshoot of the French daily, awards Le Grand Prix de l’Héroïne to the respective authors of a French novel, a foreign novel translated into French and a non-fiction book each year. 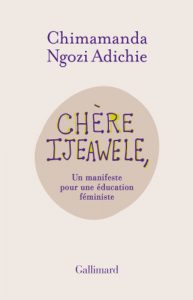 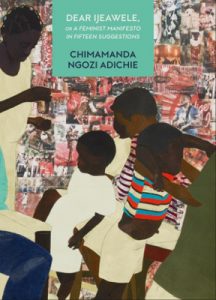 Adichie’s Chére Ijeawele (known in English as Dear Ijeawele, or a Feminist Manifesto in Fifteen Suggestions) rose to the top of the fifteen books in contention, winning the latter category. The short but punchy manifesto is written in an epistolary style to Chimamanda’s childhood friend and advocates a feminist approach to raising children.

Marie-Pierre Gracedieu, Chimamanda’s publisher at Gallimard, had the following to say upon hearing the win:

‘When I read Dear Ijeawele, I felt an urge to share it with many friends, women and men, who had become parents of a girl in the recent years. Then I started to feel it had to be read by parents of boys too.

‘And thereafter by every one of us to investigate our own education, and try to overcome a few inherited clichés. Therefore to publish it at Gallimard has meant a lot to me, and it is a very rewarding experience to see it awarded the Grand Prix de l’Héroïne by Madame Figaro, a prize that celebrates the power of literature and of characters as role models.

‘The fact that such an established and popular weekly has understood the importance of spreading the content of this letter-manifesto, even in the Western world, and especially in the political context we are now, brings me joy and hope.’

The awards for the twelfth iteration of the prize were given out at l’Hôtel Raphaël in Paris in July. Previous winners of African origin have included Marie NDiaye, in the fiction category for Ladivine in 2013, boxer Aya Cissoko, for her autobiography, Danbé, co-written with Marie Desplechin in 2011.