Algebra. For the last twenty years Arundhati Roy has attempted to induct the world into a different kind of algebra.

Her ambitious plan began in her 2001 essay collection The Algebra of Infinite Justice, when she condemned the United States for its response to 9/11:

So here we have it. The equivocating distinction between civilisation and savagery, between the ‘massacre of innocent people’ or, if you like, ‘a clash of civilisations’ and ‘collateral damage’. The sophistry and fastidious algebra of Infinite Justice.

Now, in her most recent book, The Ministry of Utmost Happiness—her second work of fiction, published twenty years after 1997’s The God of Small Things—Roy demonstrates the algebra that governs the world of the powerless by taking on her own country, India, for the way it achieved its economic ‘miracle’ at the expense of its poorest:

She imagined the men: new immigrants to the city, stone-workers, come home to their pre-booked, pre-paid-for spot whose rent was calculated by calibrating the optimum density of exhaust fumes and dividing it by the acceptable density of mosquitoes. Precise algebra; not easily found in textbooks. 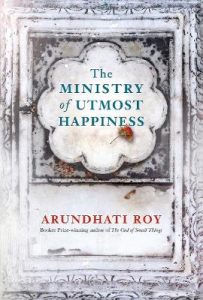 Indivisibility is the core principle of this algebra of humanity, but teaching a world created by Western modernity this lesson proves difficult, because it is beholden to its own dichotomies—mind/body, material/spiritual, public/private, man/woman, art/function. Perhaps this is why the world has struggled to comprehend the figure of Roy, and has been so obsessed with creating a division between Arundhati Roy The Artist and Arundhati Roy The Politician. Likewise, it is this world that must separate spiritual and material life, and must contort to create strange literary categories such as ‘magical realism’ to digest and understand the likes of Roy, Marquez and Okri.

The consequences of this obsession have been dire. James Baldwin, in his essay ‘Everybody’s Protest Novel’, reminds us:

Our passion for categorisation, life neatly fitted into pegs, has led to an unforeseen, paradoxical distress; confusion, a breakdown of meaning. Those categories which were meant to define and control the world for us have boomeranged us into chaos; in which limbo we whirl, clutching the straws of our definitions.

It is this breakdown of meaning that forms the central concern of The Ministry of Utmost Happiness. The narrative begins with Anjum, a hijra, or member of a third gender, long recognised in Indian society. After finding happiness as a resident in a Khwabgah, a community of her peers, an older friend tempers her teenage naivety by asking if she knows why God made hijras, going on to assert: ‘He decided to create something, a living creature that is incapable of happiness. So he made us.’

Price-rise, children’s school-admissions, husbands’ beatings, wives’ cheatings, Hindu-Muslim riots, Indo-Pak war—outside things that settle down eventually. But for us […] [t]he riot is inside us. Indo-Pak is inside us. It will never settle down.

In addition to this internal conflict, Anjum’s country is one that never settles down and she is caught in the crossfire several times. During the 2002 riots in Gujarat she winds up in a refugee camp, an experience that leaves her so altered that upon returning to Delhi she takes up residence in a graveyard and creates a guesthouse for down-and-out travellers. Later, she is caught up in the 2011 Delhi anti-corruptions protests, during which she happens upon an abandoned baby. She has long expressed a strong mothering instinct, and prepares to take arms for this baby, but before she can do so it is kidnapped by a middle class woman named Tilo.

The ‘riot’ inside Tilo is the Kashmir conflict, which takes up the vast majority of the book’s narrative. It goes back thirty years, to Tilo’s architectural college days, which sees her work with three men who go on to become, respectively, an intelligence officer in the Indian government, a Kashmiri freedom-fighter and an ostensibly independent journalist who is really in the government’s pocket. The four are brought together again in the 1990s, when Tilo is arrested on a houseboat for apparently colluding with a militant.

For all its importance, Roy is aware that executing the algebra of indivisibility in literature is a tall order. In the latter half of the novel, Tilo writes in her notebook: ‘I would like to write one of those sophisticated stories in which even though nothing much happens there’s lots to write about. That can’t be done in Kashmir. It’s not sophisticated, what happens here. There’s too much blood for good literature.’ She goes on to ask: ‘What is the acceptable amount of blood for good literature?’

The task of creating ‘bloody good literature’ is, indeed, difficult. Where the prose of The Ministry of Utmost Happiness is at times as beautiful as that of The God of Small Things, which could cause one to bristle and delight, this effort is sometimes restrained or bogged down by the ambitious weight and scope of the narrative.

There are times when Roy is perhaps too democratic a writer, sparing no detail—such as in the description of a seizure-prone, severely sick dog who enjoys biryani and mangoes in the summer. Likewise, there are times when Roy is too autocratic a writer, ignoring the wills of her characters, driven too hard by her own determination to connect and create plotlines. With both these tendencies, too much time is devoted to subplots and not enough to fleshing them out.

Roy’s democratic autocracy is most troublingly reflected in the character of Anjum. The narrative begins and ends in Anjum’s graveyard, and it would seem initially that she is a vital character in and of herself. However, after weighing up the two key narrative strands something else becomes apparent: the most important parts of the novel seem to happen in Tilo’s half. More troublingly, it would seem that Anjum is included for sentimental value, in contrast to the harsh realities of Tilo’s Kashmir. By neglecting to flesh out Anjum’s story, Roy reduces her to a metaphor for the forces, events and social decay that have unsettled Tilo and India’s lives. Anjum and the many Others of this world deserve better than that; they deserve to inhabit the imagination of the novel, and the world, more freely and completely.

At some point in the narrative, Anjum asks if it is ‘possible to live outside language?’ The power that comes from naming—be it ‘India’, ‘Pakistan’, ‘Kashmir’, ‘man’, ‘woman’ or ‘hermaphrodite’—is the power to dominate. The algebra of humanity would hold that it is possible for those who have been deemed Other to refuse this language and to exist outside of these categorisations. To refuse language is to refuse domination.

Perhaps having intuited this trouble, Roy stated in a 2011 interview on her ‘return’ to fiction:

I’ll have to find a language to tell the story I want to tell. By language I don’t mean English, Hindi, Urdu, Malayalam, of course. I mean something else. A way of binding together worlds that have been ripped apart.

The task of creating a new language, a new algebra for humanity so divided, is a difficult one, and the world is richer for Roy having attempted it.