‘In the US we have just elected a government committed to white supremacy. Tonight I wanted to talk about what it means to aspire to white dominance.’
—Claudia Rankine, Soweto Theatre, 14/06/2017

Two days after multiple award-winning, MacArthur ‘Genius’ Grant recipient, playwright and poet Professor Claudia Rankine gave her well-considered keynote address at the Soweto Theatre, the police officer who gunned down Philando Castile in St Paul, Minnesota, was infamously acquitted of manslaughter. (Note: the charge wasn’t even murder.) Perhaps Rankine would say the facts of the case—including footage from the officer’s dashboard camera, which tell a story of extreme recklessness—didn’t matter, because, in the white imagination, black men are always guilty.

Or, to quote her book-length poem, Citizen: An American Lyric—a work that deepens Rankine’s literary project, which has seen the invention of a new art form worthy of its own term: the American Lyric: 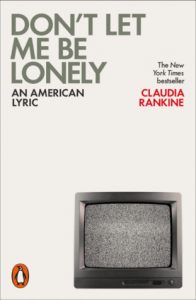 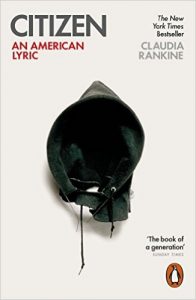 The white imagination has for several years been a topic in Rankine’s work. In her first American Lyric, Don’t Let Me Be Lonely (2004), Rankine captured grief and mental illness with poetry, a deliberation of the George W Bush years and pictures of television static. She shared impressions of her own depression and how it ranges from quizzical alienation and numbness, to waves of sadness, to blunt anger. Furthermore, she showed how sadness arising out of the false promise of the American Dream, when revealed to be fantasy, kills black people before they die:

Because the foundations for loneliness begin in the dreamscapes you create. Their resemblance to reality reflects disappointment first.
—Don’t Let Me Be Lonely: An American Lyric

South Africa has also peripherally featured in her work. In Don’t Let Me Be Lonely, Rankine makes a passing comment about JM Coetzee’s Elizabeth Costello; at another point she recommends Disgrace to a friend. One day at breakfast she spots an article in The New York Times:

My body relaxes. My shoulders fall back. I had not known that my distress at Mbeki’s previous position against distribution of the [ARV] drugs had physically lodged itself like a virus in me.
—Don’t Let Me Be Lonely: An American Lyric

In Citizen, published a decade after Don’t Let Me Be Lonely, Rankine’s poetics create a new language to document the experience of microaggressions, the near-invisible but deadly thorns of contemporary racism and the perpetual tension of the black body in public. While black pain is the focus—

—the white imagination comes closer to the fore:

Rankine was at the Soweto Theatre as part of its Africa Month programme. The house was packed.

The white imagination and the racial imaginary are what Rankine is currently concerned with, head-on. This was the thrust of her address, which through video (Louis CK made an appearance), pictures and a sharp distillation of her research painted a startling picture of how sweeping yet shockingly narrow the white imagination is in America. Her new efforts are exciting, as they chart less-explored territory in critical race theory and shift the burden of introspection to those who carry racial dominance.

Rankine is not interrogating blackness: rather, she wants to crack open the construction of ‘whiteness’—its history—and understand what it means to aspire to white dominance. She engages with how whiteness became a commodity, and continues to be a rising stock to this day. This is the mission of The Racial Imaginary Institute, which was founded largely with her MacArthur Grant and which she hopes one day will have a branch in South Africa, she said.

One of the first projects the multimedia Racial Imaginary Institute is undertaking is supporting and organising discussions around the work of visual artists who depict and critique white dominance; artists who force the viewer to engage with the issue, instead of sidestepping it as is done in daily life, where white dominance has become invisible, or when seen is viewed as normal.

In her address, Rankine expressed her belief that the term ‘white privilege’ is used so often that we have stopped interrogating it deeply enough. Instead, she prefers to talk about what she believes it really is—‘white supremacy’—and to look at examples of ‘internalised dominance’ in white people as well as ‘white fragility’ in real life, film, art and on the internet. In this way, she says, we can make sense of patterns of exclusion, wealth distribution and emotional trauma.

In an evening of many wise words, one of the most striking things Rankine said was: ‘White fragility ends discussions … and ends lives’.

Throughout her talk, and despite the life-and-death nature of her subject, Rankine’s warmth emanated from the stage. She spoke of racism without bitterness, but rather with a sharpness emanating from her experience of injustice. Though her keynote was short, we could not help but appreciate how much relevance her ideas had to the local, South African context.

Listen to The JRB’s recording of Rankine’s address:

A lengthy question and answer session followed Rankine’s eloquent keynote, after which I was able to get a private interview with her.

Claudia Rankine: [laughs] Exactly! You got me there! I don’t.

The JRB: So how did you decide to create this liberating form/format/genre as a way of expressing your thoughts and experience and, as Nina Simone says artists should do, ‘reflect the times’?

Claudia Rankine: Well I think I’ve always been interested in the visual arts. Because I’m talking about race much of the time, even when I’m talking about mental illness—like in Don’t Let Me Be Lonely—and trauma and stresses in the body. I’m talking about how it gets perceived. So that to me meant I needed to move across forms that employed different senses.

The JRB: Could you tell us a bit about the genesis of The White Card, your latest play, and whether it relates to the focus on white dominance you spoke about in your newer work today? I’ve heard that Citizen was meant to be adapted as a play but that never happened. Why?

Claudia Rankine: Well you’ve done your research. Citizen was adapted and is out there but I didn’t adapt it. I was asked to adapt Citizen but it didn’t make sense for me to write Citizen again as a play. I’d just spent a lot of time writing it as a book. I began writing a new play that became its own thing. The play, which opens in February, is a collaboration between the American Repertory Theater, Harvard and ArtsEmerson in Cambridge, so it will open in Boston. It’s a play about negotiating black death at a time when everybody’s attention is on that. So, what does it mean for white people to want to display black death, and what does it mean for black people to want to display black death? And who has the ability to display it more in terms of affecting any kind of change? And what are both black and white people’s investment in even looking at black people? Those are the questions that the play takes up, but it takes them up in the art community.

The reason I’m interested in the art community is because I really feel as if at the end of the day we’re talking about optics. I can get on the phone and talk to somebody and everything’s cool and then I arrive at their office and they start acting out in ways where, I’m like, whoa! And the only thing that happened is that I happened. So we really are talking about optics. We’re talking about what it looks like and why what it looks like is so unsettling to people. So the play has to do with that and, you know, it’s an interesting time.

At the Whitney Museum in New York we just had a white artist, Dana Schutz, who painted Emmett Till. And there were calls by black artists for the museum to take it down. You know they [the black artists] said she didn’t have any right to do that, she cannot use black death in this way, especially because it increases her commercial value. And then I went to talk to her [Schutz], and her desire to do it came from a real desire to connect with all of the people who were dying, but at the same time from a position of real ignorance about everything that’s going on. So it was an odd combination.

The JRB: Writer-wise who are you excited about? Who are you reading at the moment?

Claudia Rankine: Teju Cole just came out with his great book of photography, Blind Spot. I read one of his passages every day and really look at the photograph that goes with the passage. Then Henry Louis Gates Jr has a book that hasn’t come out yet on important facts about black people and I’m reading and reviewing that at the moment.

The JRB: South Africa has held a fascination for you for some time. Likewise, South Africa has been fascinated by you. Many black South Africans felt Citizen, with lines like ‘The past is a life sentence, a blunt instrument aimed at tomorrow’, was completely applicable to our past and not-changed-enough-yet present. Have you visited the country before? In light of your writing on race, in particular, how does Johannesburg feel to you?

Claudia Rankine: It’s tricky, in a way I feel like I can’t speak very much about it only being here for a couple of days. But I can say, one, it’s an amazing experience that can’t be articulated easily or fully. Two, what it means to be in the majority, when in the States it so rarely happens—it’s incredible. It’s incredible to walk around and see beautiful black people all the time, everywhere and thriving. So that’s really good for my soul.