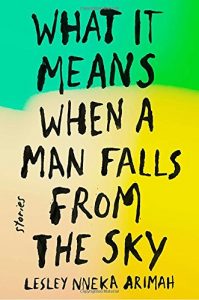 What It Means When a Man Falls From the Sky
Lesley Nneka Arimah
Riverhead Books, 2017

Lesley Nneka Arimah’s debut collection of short stories, What It Means When a Man Falls From the Sky, is marked by a refreshing unrepentance about the use of Nigerian phrases, and non-English words generally. The author presents them confidently, as though part of a natural conversation with her readers, without explaining their meanings. Rather than impeding the flow of the stories, or detracting from their brilliance, they enhance the fiction on offer, partly by indicating that the stories derive from many worlds at once. They are stories charged with detail, many right from the first line. Set in the UK, US and Nigeria—and in fantastical versions of these places—they explore the dynamic relationship between mothers and daughters, the effects of the past on the present and future, lesbian love, mental illness, and the Nigerian Civil War.

Arimah has the ability to say a lot in one paragraph, and this at times can seem overwhelming. However, once one has settled into the rhythm of her writing, it becomes more obvious that this characteristic is an effective stylistic choice rather than a flaw.

Twice, Arimah reverses the trope of migration, from Africa to the West, from poverty to the promised land. In ‘Wild’, the main character, Ada, travels back to Nigeria to be straightened out by an aunt who has a supposedly well-behaved daughter, Chinyere, who turns out to be unequipped to nudge her American cousin onto the right path. In ‘Light’, another migration story, it is a wife who migrates, rather than a husband, inverting the standard trope of women becoming ‘grass widows’, holding the home together while the man seeks greener pastures. The story also shows us a different kind of a mother-daughter relationship, threatened by the tension of distance, and a father who tries to raise his daughter as best as he can.

‘Who will greet you at home’, a story first published in The New Yorker and a National Magazine Award finalist, announced Arimah as a dazzling new voice, whose imagination and wit bring to life the strange and wondrous. In the story, women make babies from the materials around them, and each baby imbibes the qualities of those materials. The mothers present the babies to mother figures, who bring them to life. The making, the choice of the material, and the ‘unveiling’ of the child are steeped in age-old traditions, with a precise set of rules and etiquette. But class, power and privilege come to the fore, as there are porcelain babies for the rich, and mud, raffia, wrapping paper, cotton and hair babies for the poor: women make babies that reflect their class; in this world there is no social mobility.

Arimah’s alternate worlds reach their dystopian climax in the title story, however. In ‘What it means when a man falls from the sky’, only Africa and Australia are not covered by water. Grief can be identified and removed, and humans have successfully discovered how to defy gravity and fly, using a formula discovered by a Chilean mathematician, which ‘explained the universe’. In another neat inversion, ‘Third World’ countries give aid to refugees from the developed world. But some things never change, even in this new world order: nepotism, corruption, colonialism and genocide inevitably rear up. The British threaten the Biafra-Britannia alliance with biological weapons; the French eliminate their unsuspecting Senegalese hosts with a mysterious illness; and nationality and class are tattooed on wrists.

Returning to everyday life, a number of stories in the collection portray Nigerian women caught in situations that test their resilience. In ‘War stories’, a father relives the horrors of the Nigerian Civil War by retelling his experiences to his teenage daughter, who has assumed the role of his chess companion and confidante, taking over from an army veteran who has committed suicide. In ‘Windfall’, a mother drops her daughter intentionally and sues companies for the resultant injuries. In ‘Redemption’, Mayowa, a house-help, causes the scales to fall from another girl’s eyes, confronting the patriarchal status quo. ‘Buchi’s girls’ is a story of survival, as a mother and her two daughters grieve the death of their father/husband and son/brother, and face the hard decisions required for survival.

Arimah’s writing is fantastic, magical, realistic, experimental and more. In ‘What is a volcano?’, a fable that explains the origin of volcanoes, the goddess of Rivers and the god of Ants feud for ‘five human centuries’. Ant, the lesser god, tries without success to prevent River’s greater force from washing away his colonies, ‘a fun diversion for a woman such as she’. But River ignores the warning ‘you do not take small things from small men’. The feud escalates; Ant kidnaps River’s precious twin daughters, and one dies. He whispers his entire being and all his secrets into a small blue stone, and deletes the information from his memory. He tries many ways to hide the stone, but all fail, until he realises: ‘one could ask almost anything of a girl’. He passes on the responsibility of the secret, and it is guarded forever, ‘by the type of girls who, above all else, obey’.

The type of girls who, above all else, have bad luck also get a mention. How can a girl aware of her bad luck live life to the fullest? By tricking the powers that control her fate, of course. ‘Glory’ is the sad life of a girl named Glorybetogod by her parents—a girl who sees herself as ‘a black hole’ that compresses and eliminates fortune and joy. Her grandfather also sees that she has a bad chi and, on one of her yearly visits to Nigeria, tells her, ‘There is only disaster in your future if you do not please the gods.’ Glory replies, ‘Papa, you know I don’t have it in me to win anyone’s favour, let alone the gods.’ Her grandfather tells her, ‘If you can’t please the gods, trick them.’ Glory then meets Thomas, ‘a lucky man’, at her call centre job, and his luck rubs off onto her until some good trickles into her life. To keep this run of luck going, Glory knows she has to make a decision: whether or not to keep Thomas in her life, and continue to trick the gods. Although dotted with humour, the story is uniquely affecting, showing the large role chance can play in determining a person’s true nature.

Arimah is a keen observer of character, and her scrutiny of inner conflicts, feelings and relationships reaps insights in unexpected places. In ‘Second chance’, a mother steps out of an eighteen-year-old, patina-tinted photograph to buy a mattress for her eldest daughter Uche. The mother, who has been dead for eight years, is welcomed back by her younger daughter and husband, but treated coldly by Uche, whose confusion and anger are a cover for her sadness. But the story is also about the love of a man for his dead wife that time couldn’t erode, and Arimah contrasts sentences deliciously, creating a textured layer of pasts as the story unravels in the present: ‘My father putters around her, and he is grayer, paunchier, slower than the last time I saw them together, but they move the same way, a tender, familiar dance.’

People usually try to peer into the future from the present, but Arimah’s characters examine the past while standing firmly in their now. Time itself, at certain points, seems to interact with the characters, as in the opening story, ‘The future looks good’, which begins: ‘Ezinma fumbles the keys in the lock and doesn’t see what came behind her …’ Time is a tangible force: Ezinma is unaware, in the present, of the force of the past hurtling towards her from behind, and its impending, devastating collision with her present. In ‘Wild’, a clock is proffered to soothe a confrontation between cousins Ada and Chinyere, and a woman they meet at a fundraiser, Grace, who claims to have been a girlfriend of Ada’s dead father. When Chinyere storms off, Ada collects their gift bags and makes to follow her. A woman tells her: ‘Here take mine too … as though a third clock could turn back the minutes and undo catastrophe.’

Stopping the clock to spend time with the stories of What It Means When a Man Falls From the Sky is ultimately a deeply rewarding act. Arimah’s writing is honest and moving and it’s a pleasure to traverse the many worlds, outer and inner, real and fabled, that she conjures.