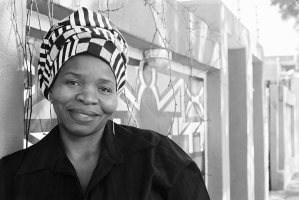 Makhosazana Xaba co-edited the anthology Queer Africa: New and Collected Fiction, which won the 26th Lambda Literary Award for the fiction anthology category in 2014. She is also the author of Running & other stories, which won the SALA Nadine Gordimer Short Story Award in 2014. She is currently working at GALA on several book projects. She is also the author of four poetry collections: these hands, Tongues of their Mothers, The Alkalinity of Bottle Water, and The Art of Waiting for Tales: Found Poetry from Grace – A novel. Her poetry has been anthologised extensively and translated into Italian, Mandarin and Turkish. In 2014 she was nominated for the poetry category of the Mbokodo Awards.

Her long-term project is a biography of Helen Nontando (Noni) Jabavu.

She holds an MA in Writing (with distinction) from Wits University and is pursuing her PhD at Rhodes University as a Mellon Scholar. She is a feminist activist at heart with years of experience the NGO sector working in local and international organisations on women’s health and philanthropy. She is a former anti-apartheid activist and spent some time in exile. She has lived in Johannesburg since 8 June 1990, when she returned.

Running and other stories (Modjaji Books, 2013)