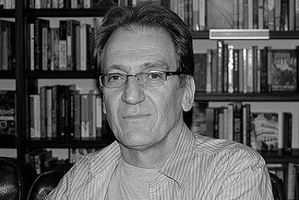 Ivan Vladislavić was born in Pretoria in 1957 and lives in Johannesburg. His books include the novels The Restless Supermarket, The Exploded View and Double Negative, and the story collections 101 Detectives and Flashback Hotel.

In 2006, he published Portrait with Keys, a sequence of documentary texts on Johannesburg. He has edited books on architecture and art, and sometimes works with artists and photographers. TJ/Double Negative, a joint project with photographer David Goldblatt, received the 2011 Kraszna-Krausz Award for best photography book.

His work has also won the Sunday Times Fiction Prize, the Alan Paton Award, the University of Johannesburg Prize, the English Academy’s Thomas Pringle Award, the Olive Schreiner Prize, the CNA Literary Award and Yale University’s Windham-Campbell Prize for fiction. He is a Distinguished Professor in the Creative Writing Department at Wits University.

Ten Years of Staffrider, 1978–1988 (with Andries Walter Oliphant) (Ravan Press, 1988)
blank_Architecture, apartheid and after (with Hilton Judin) (Netherlands Architecture Institute, 1998)
T’kama-Adamastor: Inventions of Africa in a South African Painting (University of the Witwatersrand, 2000)